At Riley’s Apple Farm, you can learn about life in the late 1800’s, pick apples and make cider . 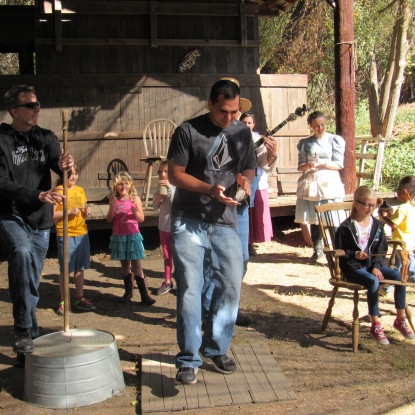 We woke very early to get to Riley’s Apple Farm. It was about a 95 minute drive into the mountains. After we parked and found our homeschool group, we started off in the gift shop. There were lot of toys and games. After that, we went to the theater and listened to a banjo player. Some kids were selected to go up including me. We used some jugs , wash bins and triangles to play music.

Next, we went to place where we did many homesteading activities. Homesteading is a lifestyle of self-sufficiency. I did the laundry first. You pick a piece of laundry, scrub it on the wash board, then hang it up to dry. After that, we peeled and cut the apples to make apple preserves.  We also got to eat the dried-cut apples. The dried apples were so fluffy, chewy and would melt in your mouth. Coming fresh from the tree, the cut apples were juicy, warm and sweet. Super tasty apples!!!!!!!!!!!!!!!!!!!!!!!!!! 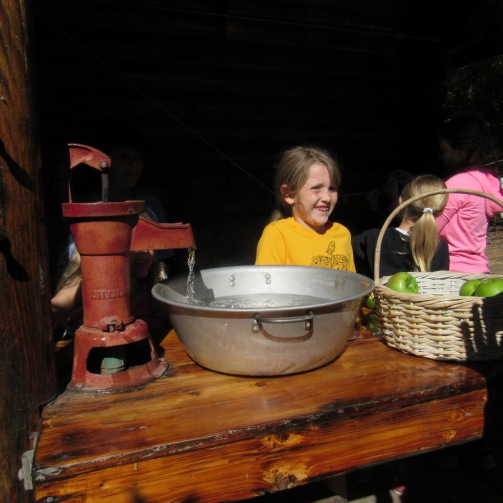 We also got to build a log house. I had two turns with my friend Hannah. After we played, we snapped a pic in the  pumpkin patch and ate our lunches.

Next, we made rope. To get off all the sprigs you burn them. 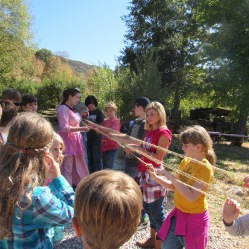 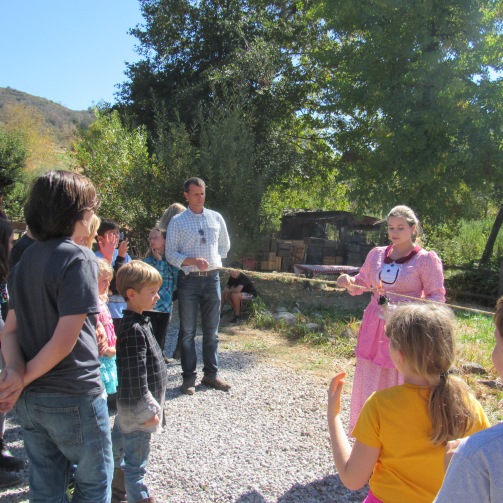 From there, we started to pick out apples for the cider. After we got all the apples,  we squashed them into cider. We received  a gallon of cider and split in between the group. After we had drank our fill of the tasty apple cider, all of us went on a nature walk.

We walked through the apples trees, which were lined up in order.

For the last part of the tour, we did archery. If you were seven and under, you can make a kazoo instead. I was  in the archery so I can tell you about that. First, everyone got instructions. We slipped the clip onto the string and pulled back. BAM! I let the arrow go, and it hit the hay! We love the shooting. And that is the end of the tour, but not our day.

My brother and I piled into our friend’s car and drove to  Law’s Oak Glen Coffee Shop. We got the best apple pie and vanilla ice cream I had ever tasted. Those two desserts were great together. I wanted more, but apparently I didn’t get more. After we had our wonderful pie, we headed home.